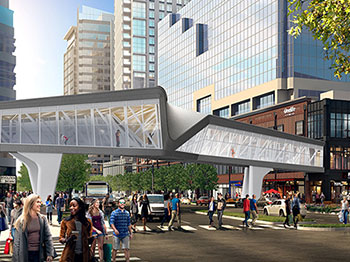 Overview
The redevelopment plan for Ballston Quarter, the commercial center of Arlington, Virginia, included a new pedestrian bridge, shown in a conceptual drawing above. 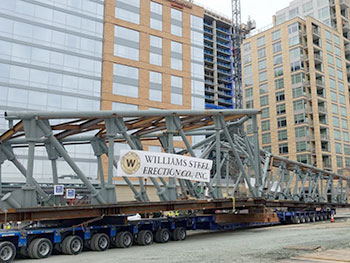 Using a technique called accelerated bridge construction, the new bridge superstructure, was prefabricated off site, transported to the location, and then lifted onto prepared piers. 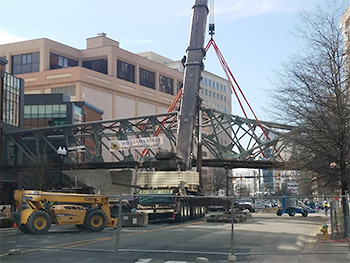 The superstructure weighed approximately 100 tons and provided 157 linear feet of walkway varying between 12 and 19 feet wide. The transport and positioning of the superstructure occurred over a single weekend. 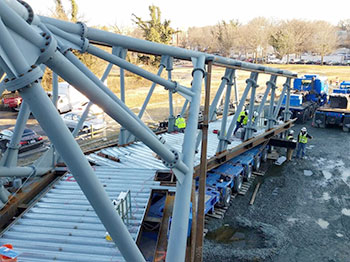 Monitoring Requirements
Although standard survey instruments were proposed for placement activity, engineers wanted assurance that structural integrity of the superstructure would be maintained during transport and lifting. GEO-Instruments was asked to provide near-real time monitoring of stresses and possible deformation. 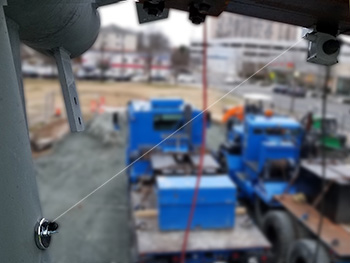 GEO installed string potentiometers at specified locations to monitor any changes in structural geometry. These monitored changes in the distance between structural elements. Measurements were recorded at 3-second intervals. Loggers in the blue boxes above were in operation during transport of the super structure. 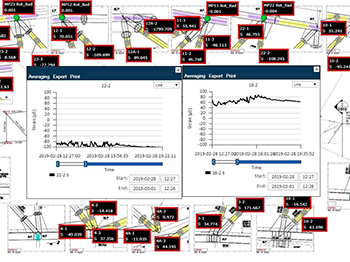 Results
All of the sensors were connected to battery-powered loggers that were capable of maintaining a rapid throughput. The loggers transmitted measurements via cellular modems to GeoCloud servers that checked for alarm conditions. GeoCloud Quickview provided graphical presentation of data that engineers could view with PCs and smartphones.

GEO supplied, configured, installed, and commissioned the monitoring system within a short 36-hour window. The instrumentation program helped engineers manage risk while they transported and successfully placed the bridge superstructure. Strain and deformation values remained below alarm thresholds during the entire operation, including the week afterwards.