Old South Church is a national historic landmark in Boston. It was built in 1873 on a wooden pile foundation. In 2008, high pressure grouting operations on a nearby subway station caused some of the piles to shift and opened a 70-foot long vertical crack in the east wall of the church. The crack, which varied from hairline to 1 inch in width, ran from the foundation to the roof of the church.

Work on the subway was halted immediately. Geotechnical and structural engineers, as well as specialists in stained glass, masonry, and historical restoration were brought together to find a solution. GEO-Instruments was selected to provide the monitoring services in two phases.

Phase one called for direct monitoring of the crack and the stability of the wall through the use of crackmeters and an AMTS (Automated Motorized Total Station). Readings would be taken automatically, processed, and displayed on a project website.

Crackmeters: 12 vibrating-wire crackmeters were installed at selected locations along the crack, with special configurations where the crack ran along the stained glass frames and the base of the arch. Readings were taken every 15 minutes.

AMTS: 40 AMTS prisms were positioned on the wall in a pattern that would allow detection of structural movement. Five additional prisms, used as reference points, were mounted on stable structures outside of the zone of influence. The AMTS collected readings of all the prisms every thirty minutes.

Thermocouples: 2 thermocouples were installed inside the upper and lower sections of the wall to monitor changes in the interior temperature of the wall itself.

Phase Two called for monitoring of porewater pressure and deformation of the ground between the church and the subway station.

Piezometers: 15 vibrating-wire piezometers were installed to monitor for changes in pore-water pressure that could weaken the soil holding the pilings.

Inclinometers: 2 In-Place Inclinometers were installed to monitor possible deformation of the soil mass between the church foundation and the diaphragm wall constructed for the subway project.

Hydrostatic Level System: A liquid level system with 14 cells was installed to monitor settlement or heave of the foundation below the east wall.

Within 36 hours of receiving the notice to proceed, GEO-Instruments had not only supplied and installed the instruments for phase one, but had also verified operation of the system, configured a wireless data acquisition system, and posted data on a project website.

The monitoring system implemented by GEO-Instruments helped engineers design and verify repairs to the church. The system also provided allowed resumption of work on the nearby subway. 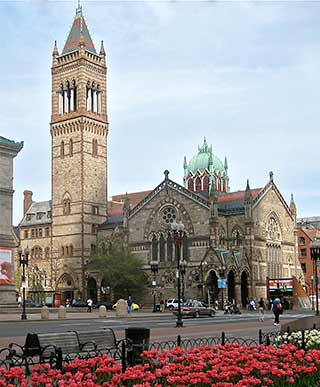 Work on a nearby subway station was halted when a 70 foot-long vertical crack opened in the east wall of the historic church. 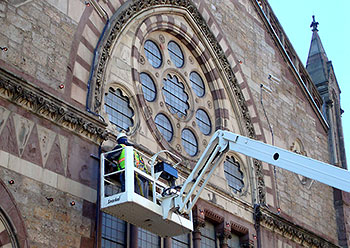 GEO-Instruments used a manlift to install instruments on the 100 foot high wall. The entire system was up and running within 36 hours of receiving the call. 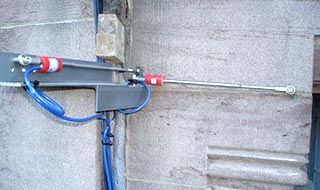 Special configuration of crackmeters near the stained glass windows.

GEO-Instruments deployed and AMTS and 40 prisms to monitor stability of the wall.