Significant deterioration of the pilings supporting this busy six-lane parkway threatened its stability. Because the highway carries over 150,000 vehicles daily, it had to remain open to traffic during reconstruction. To manage the risk, highway engineers contracted GEO-Instruments to implement a monitoring system with early-warning alarms.

Running nine and one-half miles along the eastern edge of a high-traffic metropolitan area is a six-lane marine highway that carries more than 150,000 vehicles per day.Designed in the 1940s, much of this highway was built on fill and timber pile platforms. The city inspects the piles every five years. The most recent inspection detected significant deterioration of the piles, with some piles entirely missing. This damage was caused by millions of tiny marine borers, or “sea termites,” feeding on the wood. The weakening of the piling support threatened the stability of the highway.

GEO-Instruments installed instrumentation at expansion joints in sections of highway that were located over the deteriorated piles. The instruments included twelve 3D crackmeters that monitored X, Y, and Z displacements of the concrete structure supporting the road. Five sets of biaxial tiltmeters, specified by the owner’s engineer, provided backup measurements.

Readings were collected 24/7 by a CR800 data logger and transmitted wirelessly to a GEO-Instruments server. Power for the logger and sensors was provided by solar-panel charged batteries. A cellular modem was used for data transmissions.

Software on the server processed the readings and checked for alarm conditions based on thresholds set by the engineers. Alarm notifications could be sent via email and text messages to smartphones and PCs. GEO-Instruments also provided a website for the project, where users could see a graphical representation of the site that updated automatically with incoming data.

The system enabled continued use of the highway during reconstructions and ensured the safe passage of thousands of vehicles. 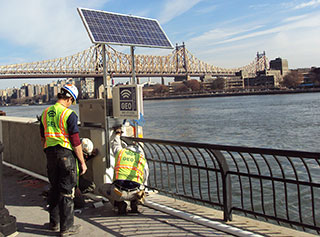 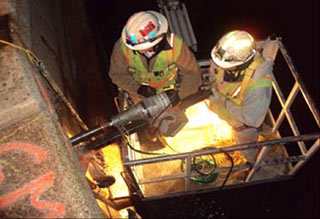 Drilling an access hole for one axis of the 3D crackmeters. Access was available only at night. 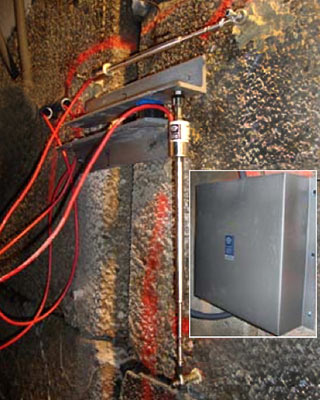 3D crackmeter as installed. The inset shows how the sensors were protected by a stainless steel cover.