In November 2008, a heavily loaded barge battling strong currents collided with a bridge pier. The collision damaged the pier and caused misalignment of the swing span, which would no longer close properly.

A data logger recorded readings from the beam sensors at one-minute intervals during the tests. The vibration-monitors had self-contained loggers to record readings in real time.

Both the data logger and the vibration monitors had wireless connections to the internet. A web-based GEO-Instruments server processed incoming readings and posted them in graphic form on a web page within three minutes of being recorded.

The static load test was conducted in 4 phases over a 5-day period. To apply the load, a crane barge placed jersey barriers onto the bridge deck. The fully loaded deck was able to hold 96 jersey barriers, equivalent to 185 tons. Engineers were able to view near-real time readings during the tests using an on-site PC and a web browser.

The tests proved that the bridge was safe for traffic and it was reopened. The bridge was finally replaced in 2012. 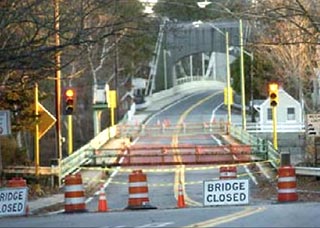 Hines Bridge was closed after being struck by a barge.

Beam sensors were installed on four faces of the pier to monitor possible deformation during load testing. 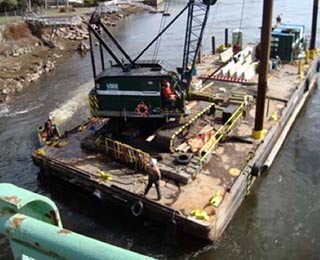 A barge-mounted crane is placing jersey barriers on the bridge deck. A barge was also used during installation of the instruments. 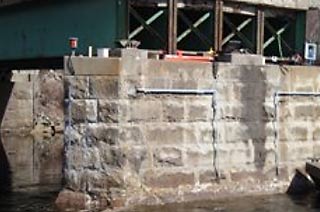 The collision damaged a pier and caused misalignment of the swing span.